Yet another sunny but chilly day in Florianopolis, in contrast to race day which was relatively cloudy and a bit drizzly at times. 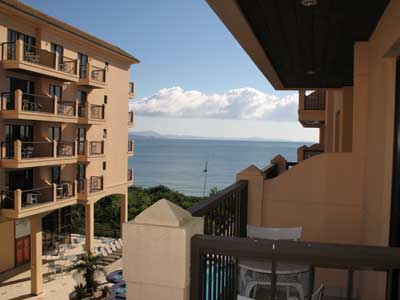 I don’t think I felt warm at any time here in Floripa at all despite the deceptiveness of the clear blue skies and sun. This morning I woke at 630a to go to the bathroom and as I turned on the doorway light, it explodes over my head, showering me with glass! I carefully backup as I’m in barefeet and put on my flip flops and my fleece and head downstairs to get someone to fix my light, because as the light blows, the electricity in my room also disappears. I fear that I may have blown the power in my whole section of the floor!
I go down there and get someone to come up and as he fixes the light and attempts to reset the fuse, the power is still off. Some genius wired the room in series and not in parallel which means that if one thing breaks the power chain in the room, then all power in the room is gone. He replaces the light and then goes to get a cleaning lady to come in and sweep the floor. She arrives shortly after and gets most of the glass. I hope I don’t accidentally “find” the other pieces…
Schwag-o-rama
Ironman races can become big shopping sprees. I try not to buy too much, but sometimes I do. 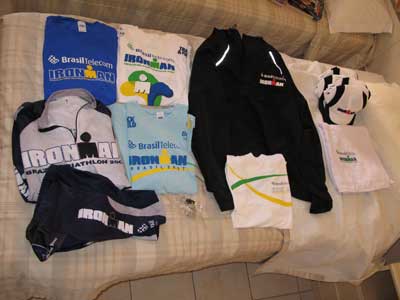 I got 2 t-shirts for free, a participant shirt and a finisher’s shirt. Bought some hats to give to people and a nice windbreaker as well as other things.
Recovery
I am glad to wake up this morning with soreness in my legs quickly disappearing. The wiped out feeling in my chest and lungs is also disappearing fast and I think that my recovery after this Ironman could be as little as 2-3 weeks. I am happy to see that my tolerance for Ironman racing is growing year after year, as my recovery at IM NZ was 6 weeks and at IM Austria last year was 4 weeks. Somehow the “torture” year after year is becoming less tortuous as I race Ironman more often which hopefully means that someday I can race and just feel like it was another normal day the morning after.
Going Home
Tonite I head back to the airport for my long journey home. I got upgraded on my AA leg from MIA to SFO so very happy about that. Time to get my stuff together and then I’ll hang out in the hotel somewhere until dinner time at which time the shuttle takes me away.
Onwards to Ironman Western Australia on December 3 later this year!