The flight over from LAX was uneventful. I’m glad I had a whole row to myself and curled up lying down thankfully, instead of sleeping sitting up. As we pulled into Sydney, the clouds were puffy and inviting.

Customs was very strict. They made sure there wasn’t any dirt on anything. I thought they would make me unpack my bike totally but thankfully they just peaked in at my tires and made sure they’re pretty clean. Of course they’re clean! I washed down my whole bike before coming here, including the tires! But looks like I got all my racing nutrition into the country, so that’s one headache gone.
Now I sit in the Sydney Airport Qantas Lounge enjoying free WIFI and blogging away about my impending race. 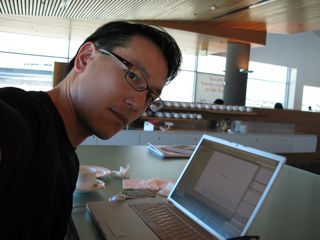 Why are all airport lounges outside the US so much better? It’s so spacious and airy in here. There is a kick ass cappucino machine that makes incredible drinks. Coffee is so much better ANYWHERE outside the US.
Sitting here in the peace and quiet of this swank lounge, I again reflect on 2007. So much I’ve learned about myself and my body, and what it is capable of, and where to go next. 2007 was the first year I’ve attempted two Ironmans, and it’s been a real experience seeing if my body could take two Ironmans in a year without a down season break in between. That, and racing in between Ironmans, has taken its toll on my body but I am confident that the fitness has been cemented in after each race. It’s managing the damage on my body after each race, and learning how fast I can come back, and figuring out how to maintain fitness which has been a challenge.
Kinesio-tape, Graston, ART, and then couple that with proper training – it’s been a real experience. I do hope I can reach a point of fitness where I can race more, and race faster. Next year I will be taking a lot of downtime, and using the early half of next year to build up run speed. I look forward to that, as I think my running strength needs to be built up considerably.
For now, I focus on Ironman Western Australia coming up this Sunday. Early news says the course is really flat, and I hope I can maintain speed without over-cranking my left leg where my kneecap is still bugging me.
1 hour before I hop on the connecting flight to Perth.