What a pain. I can’t seem to get to Ironman without travel troubles.
I wake up at 3am to get picked up at 4am to get to SFO. My flight is at 6am on Delta; way early, but it gets me in at 330p at Panama City Beach airport. That hopefully means that I won’t be too late there, but little did I know….
Flying coach really stinks. I have no status whatsoever on Delta so I sit packed in with a whole other bunch people going to Atlanta. A few others I notice have triathlon looking clothes or obvious badges of racing like a Vineman hat, or just have that fast, gaunt look about them and wear athletic clothes. I sleep pretty much the whole way and we land in Atlanta.
Then the fun begins.
Our flight from Atlanta to Panama City Beach is delayed. And delayed. And delayed some more. I hang with a bunch of other Ironman racers as we chat and figure out what to do. Then they tell us to go to another gate because they are waiting for an aircraft to arrive from somewhere else and it ain’t getting there in time. The only problem is…the new plane is smaller by 13 seats. Guess who is in the unlucky 13…ME! We trade in our old boarding passes and I get a SEAT REQUESTED stamp on mine. Ack! I stress for about 1.5 hours there. They tell me there are no more flights to PFN until Thursday. Or I have to go to Fort Walton Beach. Ugh!
Side note: In Atlanta airport, they have these mechanical garbage cans. Every 10 minutes or so, they start rumbling and a red light starts flashing on top, and it compacts the garbage in it down. How weird. But useful. 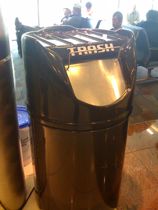 So they finally call for volunteers and offer $400 Delta dollars for switching to another flight. I ask myself, “why would I want $400 on an airline I never fly? Duh!” A few people volunteer. The rest of my newfound Ironman racer buddies all wave goodbye and wish me luck on getting to the race, and board the aircraft. I think this whole thing sucks. I sit. Then they call my name. They ask me if I want to get on the plane or go to Fort Walton and get $400. I pray, and tell them I want to get on now and go to PFN. Miraculously, they let me on.
I get on the plane and my newfound Ironman buddies see me and congratulate me on making it on the plane.
We land about 2.5 hours late. Ken Glah comes to pick me up, and sets me up with my condo.
The condo is pretty huge. Full kitchen, washer/dryer in unit, fantastic view out the porch of the beach. Very nice. Better than I thought.
But the condo complex sits in a part of America I thought was almost mythical; Panama City Beach is a heaven of cheap tourism; the strip is lined with fast food chains of nice, greasy food; the Titanic is sinking in a huge mockup of it at Ripley’s Believe It or Not; two huge neon cranes sit across our parking lot with a big sign that says SLINGSHOT where they launch you into the sky attached only by bungee cords. Being off season, the place is totally dead. By the way, it’s totally FREEZING here. Last night, it dropped into the high 30s. As the sun was setting, the temps were dipping into the 40s. Good thing I brought some wool clothes; still I felt chilled and I was reminded of Ironman Brazil where the weather was similar and I never could feel totally warm. Same here at Panama City Beach.
Ken and I head to Walmart and get lots of groceries. I also go buy something I totally forgot: a digital camera! Sucks. I gotta take pics and upload them for my training blog fans. So I plunk down $280 and get another one. What I do for my adoring readers….(sigh).
Later, my buddy Dan arrives and we go have dinner at Hooters. How nice to be served by women wearing low cut tank tops…except that most of them were…well…hefty. Guess all the hot women left Panama City Beach when summer was over…
Tomorrow, I hit the expo and get my bike from TriBike Transport. More later.