At the Museum of North Idaho I bought a post card which had a humongous potato in it. 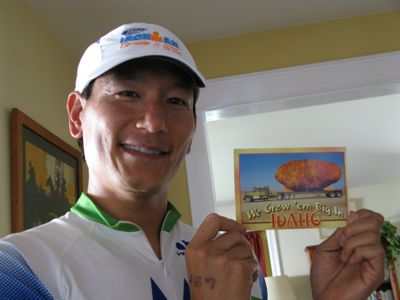 At that moment, I remembered that Idaho was famous for Idaho potatoes! But also, I realized that I hadn’t eaten a single potato. In fact, at Safeway, I didn’t really see any potatoes even being sold.
I thought this was strange, so I asked the lady at the museum shop about potatoes. I remarked that there didn’t seem to be a single potato in sight, in the potato capital of the world! She said that generally, there are no potatoes in Idaho because they basically ship all of them everywhere else and don’t keep any of them around!
We thought this was strange. Wouldn’t it be an Idaho tourist mecca to have theme restaurants serving luxury potato dishes? Potato pancakes, potato steaks, potato quiche, potato cola, potato milk shakes, potato ice cream, potato candy..why the possibilities are endless! I would think tourists would love it. Some budding entrepreneur should do this.
As long as it’s not me.