Two weeks ago I received my GoPro Video camera in the mail and was very excited to see if it could help me videotape my swimming at the pool. I bought both the standard lens and wide angle lens as forums on the TI website had noted that both lenses may be useful depending on what I wanted to video. I also bought the suction cup assembly assuming that it would suction onto the side of a pool. The camera plus suction cup looks like this: 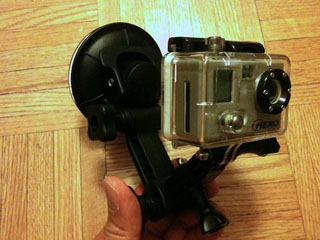 It’s nicely sealed in a watertight case which is waterproof to 100 feet.
Taking the camera to the pool, I found some constraints.
1. Depending on which pool you go to, they may have some rules regarding taking pictures or video because of privacy concerns. I go between two YMCAs and unfortunately they have strict rules on videoing. Thankfully, the lifeguards were pretty cool to let me take some video as long as I was alone in the lane.
2. The tile on the side of the pool may prohibit the suction cup sticking properly onto it. If the tiles are small, it could let air into the suction cup and thus, it won’t stick.
3. Lighting is critical. Since the camera’s sensor is pretty small, the more light the better. So on a sunny day, the video can capture me getting a lot farther down the pool before my body becomes undiscernable. See the comparison on the following two videos. This video was taken at an outdoor pool on a bright sunny day:

You can see my strokes for many times before I disappear into the distance.
This video, for comparison, was taken at an indoor pool with relatively poor lighting.

You can see how the water is much murkier looking in the second video. Unfortunately, I don’t get many strokes down the lane before I disappear so I can’t study my stroke for too many cycles which sucks.
By the way, I editted both videos and cut out the parts of the video where I disappear off into the distance and you can’t see me any more.
4. The video camera should be pointed down the middle of the lane and/or you should swim directly towards it versus off to a side. In the first video, I was able to find a place to stick the camera such that I could swim directly at it. It provides the best view of both sides of my body when stroking. In the second video, the pool side had small tiles, with the exception of where the lane number was and that tile was big enough to put the suction cup on. However, the big tile was offset to the middle of the lane and swimming towards it not directly meant I was losing some view of one side’s strokes.
5. By the way, being alone in the lane is pretty important. Otherwise, somebody else swimming there might inadvertantly knock your GoPro off the wall if they’re not careful. Certainly, you’ll capture a random person on video too.
Watching these videos, I was really able to study the problems in my stroke.
Here is what I learned:
1. Over the last few weeks, I drilled my left arm entry intensely to follow a wider track, since it felt like it was entering way too close to my head relative to my right arm. However, I did feel that my right arm was moving on a wider track. Looking at the video, I saw that my left arm had indeed began entering on a wider track:

This was good and I was happy that my drilling produced the desired result. However, in studying my right side, which I had assumed was doing OK, I noticed that the entry occurred OVER my head.

This was extremely weird and unexpected! At least my right arm ended up in the right place after entry, but it should not be entering into the water OVER my head but it should be further out like my left arm entry.
2. On both sides, upon the end of the spear of my arm forward, it then drops: 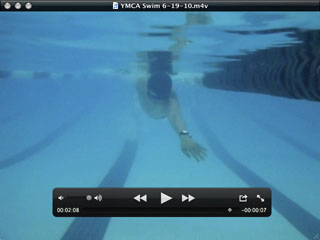 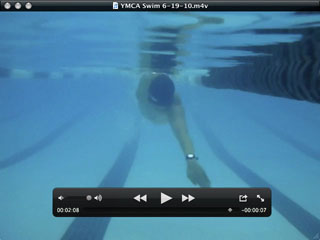 In studying swimming videos of Coach Shinji and also Dave Cameron, their speared arms never drop! I believe this robs me of some forward momentum as the deeper my arm is, the more water resistance there is (according to some literature I’ve read about the effect of the stroking arm’s depth).
3. When I swim, I use the two beat kick. On my left side with left arm stroking backward, I kick only with my left leg. Looking on the video, on my right side with right arm stroking backward, I sometimes do a scissor kick and kick with both legs! This can be seen somewhat in this screen grab, although if you watch the first video again, you will see it in motion: 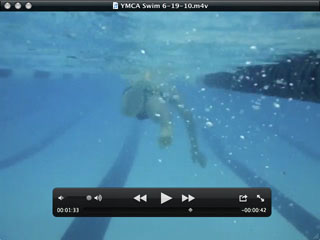 Here my right arm is stroking back and my right leg has kicked, but my left leg is cocked back and just about to kick. This is bad! My proper kicking leg is imparting rotational force to my body turn, which adds force to my stroke backward. However, if I kick my other leg while my body is turning, it resists the force of my body turn and making it weaker, thus making my stroke back also weaker. I believe this is why my left arm spear/right arm stroke back results in lesser forward momentum than my other side; I can see it when I swim where it results in me traveling further on one side but not the other!
I think this is a result of either or both of poor balance on that side and/or just my nervous system being programmed to kick twice for some reason on that side.
Absorbing all this, I jumped into the pool this last week and attempted to correct all of these. The first thing I noticed that was that my left arm spear/right arm stroke back resulted in more forward momentum, now that I focused on only kicking my right leg. Awesome!
Less successfully, I wasn’t able to move my right arm outward as much. I think this will require drilling more at slower stroke rates to fully correct. I seemed to be able to do this at lower stroke rates (I was using my tempo trainer here), but when I got to faster tempos it broke down pretty quickly and I could sense I was back to my old habit of entering OVER my head (so weird…!).
Video analysis is so enlightening and I am now bringing my GoPro always to the pool, in hopes that I can find some accomodating lifeguards who will let me video. I also want to test in another indoor pool which is lighted much better to see how the GoPro performs. I have not tried the wide angle version either, but fear that the distortion of the lens may make swimming analysis difficult. In the forums, someone noted that it was good for taking a longer view of swimming from the side, since the camera is stationary. I will have to try that to see if that is worthwhile. Otherwise, I will just use my wide angle GoPro for cool biking and running shots!