This all started after my last session with Coach Shinji. I had been working with him since July of 2009 and been spending all my time with a combination of drilling, swimming, and tempo trainer work. But something still bugged me.
I would watch videos like this one of Ryan Cochrane at the Commonwealth Games:

Man, can you see the bow wave generated by these Olympic quality swimmers? Of course, they are also moving so much faster than me.
I would also watch Coach Shinji’s videos like this one, of his 9 stroke for 25 yards:

I found out later that his tempo was 1.6 seconds to swim 9 strokes. Of course, after I found out, I put my tempo trainer at 1.6 seconds and swam 25 yards at 12 strokes. He was, for the same tempo, 3 strokes more efficient than me!
Comparing to Coach Shinji was easier than a comparison with Olympics class swimmers because of physical similarities between Shinji and me. We are of comparable height and build, versus most Olympics class swimmers who are much taller than me. But yet, despite Shinji’s height and body type being a lot closer to mine than me to a Ryan Cochrane, he was able to achieve a 3 stroke efficiency over mine! I think that other more subtle body differences may make him more naturally more efficient, but I think I should be able to still get much closer to his stroke count than 3 apart!
In this video, I saw other differences between what TI has been teaching me:

Most notably for me was the spearing arm being so horizontal rather than spearing more downward which is what we are taught in the beginning. But yet, Terry Laughlin in all his videos would teach and demostrate a much deeper spear. Why was there a difference? 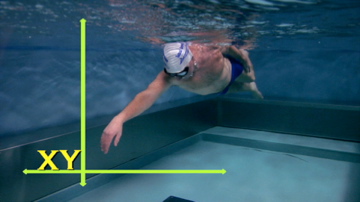