Today, I got up early and swam the Waikiki Rough Water Swim. It’s my third time swimming it and hoped for a faster time today but it was not to be – I did it in 1:22:46 which is about 2+ minutes slower than my previous time of 1:20. Rebuilding my stroke via Total Immersion has slowed me down but I know it’s for the better as I relearn how to swim with better form and build my speed from there.
This time out, I tried mapping my swim with my Garmin 305 GPS Watch. I’ve heard from numerous people on how they have done it by stuffing under their swim caps. Some put on a swim cap and then they put the watch into a ziploc bag, put it on their head, and then put another swim cap on top. Others put a swim cap on, then duct tape the watch to this swim cap without ziploc bag (it is supposedly water resistant), and then put another cap on top.
Two days ago, I had to make sure that one method would work so that on race day I would not be fiddling with the GPS watch right before race start. I didn’t have duct tape but I did put the watch into a ziploc bag to help reduce its water exposure. I put on a swim cap but I could not put on another swim cap over my watch and my head no matter what I did! I was definitely feeling like I would rip my second swim cap for sure. So I just stuffed the bagged watch under the back of my swim cap, right above my neck. That worked fine – it was a bit bulky but it didn’t bother me.
I then tried to hit the start button but no dice. I could not tell if it was started or not! When I thought I had hit the button and took it out to check, it was not started. So I just decided that I would hit start and then stuff the bagged watch under my swim cap and hope that the swim cap’s tightness wouldn’t re-hit the start button, which stops the timing. After stuffing the bagged watch under the cap, I put on my goggles and adjusted the double strap so that it would loop around the watch face and not put pressure on the start/stop or lap buttons.
Hitting the start button before the actual race start meant I would not get actual race timing this way, but I could GPS location data for the swim course. I had another Timex watch anyways so I would time the race with that.
This morning, I did all this and jumped into the water when the start horn went off. Here are the mapped results, downloaded into the Garmin Training Center and then uploaded to Google Earth application for Mac OS. 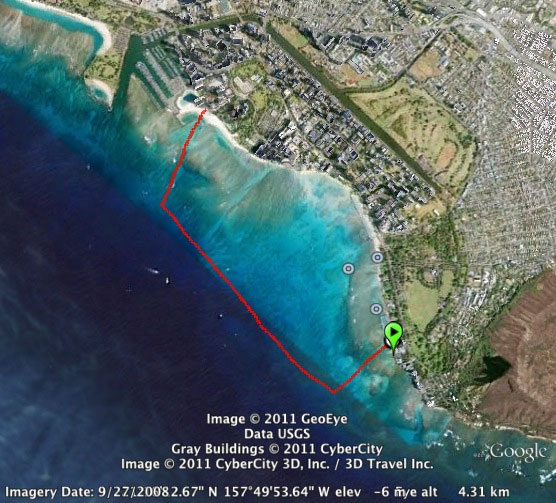 According to the GPS track, at least I did not go wandering around the course much; I was pretty much following the buoys closely. I just was slower than the last time I did it and to pour salt on the wound there was a current going in our favor too! Oh well, I got some cool GPS data to show for it and will dig later into the data to see if the speed data is worth looking at. I also look forward to jumping back into the pool to keep fine tuning my technique and hopefully improve my open water speed. Next up: Alcatraz crossing in two weeks.