Yesterday, I swam the Alcatraz Invitational 2011, one of the many Alcatraz swims that are held each year. This one is held by the South End Rowing Club and is a favorite.
Alcatraz swims can generally be held in two conditions, either starting with a flood or ebb. Then there is a slack where it changes direction and the current is zero or very low for some time, and then it fully switches to the other direction. Depending on which current it starts with determines what landmarks you sight on, and therefore, what direction you swim to work with the current and not against it in reaching Aquatic Park.
For this swim, I stuffed my Garmin 305 GPS watch under my swim cap to track the results. I am always curious on my actual track – did I go off course? How far did the current take me? Was I fast enough to get across or was I too conservative? Here is the track: 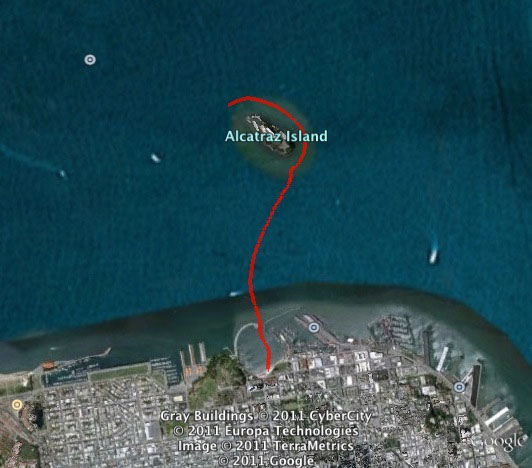 Disregard the track around Alcatraz Island; I turned on the tracking before I hopped off the boat as I wanted to make sure the timer was on before I stuffed it under my swim cap. The swim started at that little jog in the track, to the right and slightly lower than Alcatraz Island in the image.
In this case, it started with a flood, and a very mild one at that. Faster swimmers always can go directly for the opening at Aquatic Park; I thought it best that I should point slightly off from the opening in case I could not get across before the flood would start coming in and sweep me past the opening (this happened to me once; it was a tiring trick to achieve the opening when the current is going against you). So I sighted on Fort Mason and you can see the my initial track was slightly left of the opening.
As I swam across and got closer and closer to Aquatic Park, I began to steer towards the opening. But given that my track was pretty straight to Fort Mason, the current was nearly nil and I probably could have gone directly for the opening and gotten to the finish line faster.
I steered to the opening of Aquatic Park, and then made a beeline for the beach where the finish line was. By my personal watch, I made it from leap off the ship to beach timing mat in 33:43, a new personal record! (NOTE: the results say 35:09 which is probably total clock time).
I was very ecstatic – If I did not count incorrectly, this was my 15th crossing and I have been frustrated to not be able to lower my time from the usual 42-45 minutes that it takes me. Finally, I was able to come in below 42 minutes.
In future swims, I think I will be confident and go directly for the opening. I think that rebuilding my stroke via Total Immersion has helped a lot, and I shouldn’t be fearful that I will mistime the currents, although given the varying conditions of the San Francisco Bay, I am sure it will happen more than once still in the future!