On Saturday June 30, I was in NYC the week prior on business and decided to stay an extra day to attend Hardstyle Kettlebell Certification (HKC) workshop and get certified.
I had first discovered kettlebells shortly after reading Four Hour Body by Tim Ferriss and began using them regularly, although I had no formal training and only went by what I read in books and saw in DVDs. But now I was in a place where I really should get some formal training on how to use them, because as evidenced by my first attempts at deadlifting, I was totally doing it wrong until someone set me straight.
In addition to my Total Immersion swim coach certification, I thought that I had better start broadening my credibility in personal training, which is basically to go out and get as many certifications as you can. Interesting industry, this personal training stuff. I don’t have an Olympic medal or professional sports career to fall back on; I gotta go get all these “degrees” in many areas of personal training to be credible and expert in the eyes of potential clients.
Also, given that I’ve stopped doing Ironmans for the time being, and pretty much all long distance racing also, I felt the need for another challenge. And there was one related to kettlebells, which is the Russian Kettlebell Challenge (RKC) which is part strength/endurance challenge and part certification for becoming a kettlebell instructor of the first degree. What makes this ridiculous in some ways is the strength test at the end: I have to snatch, single armed, a 24kg (53lb) kettlebell 100 times in 5 minutes! At the moment, I can barely snatch a 16kg (35lb) kettlebell 3 times before taking a break, and then only my right arm and not my left! So having done the Ironman thing, it’s now time to set my sights on yet another physical challenge!
One note: while the 100 snatches in 5 minutes is daunting, the whole RKC workshop is a challenge in itself. It covers 3 full days of workshops, tossing around heavy kettlebells each day, and then you have the strength test at the end. This is something I definitely experienced in the single day of the HKC workshop!
The HKC workshop was held at the Five Points Academy, a MMA training studio on the top floor of a building I must have walked past dozens of times, at the corner of Broadway and Canal. The day was a typical extra hot NYC day; it probably rose to 95+ outside with steamy humid air, and the air conditioning in the MMA studio was only half working. Not good!
As you walk in you see a showcase of MMA belts won by winners who work out there: 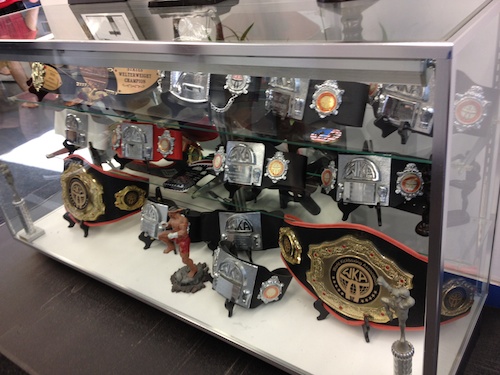 I got there early and sat down near the racks of kettlebells along the wall: 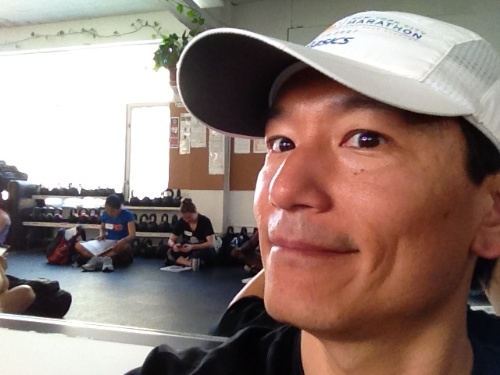 It’s nice to see a gym that isn’t scared of putting kettlebells out for general use. I’ve been to other gyms where they are always either very light or locked up in some special room. Yes kettlebells are pretty dangerous; you swing them around and if you let go, you better hope that nobody is around you – and woe to the floor when it hits!
The HKC workshop started with a strength test: 5 chin-ups, full lock out of arms at the bottom, chin must clear the top of the bar at the top of the chin. You can also do pull-ups as well; either one is OK. Women can choose to do the chin/pull-up test or do the 15 seconds hold at the top of the bar, either pull or chin-up style. We got this over with thankfully at the beginning of the day as I was worried about doing this after being wiped out all day from workshop activities. But little did I know what was in store endurance-wise later.
We then went through a lot of great stuff. These were:
1. Proper deadlift form with kettlebell. This formed the basis for starting many kettlebell moves. Engaging the spring potential of the glutes and hamstrings. Use of a Functional Movement System technique with pole to teach proper back alignment.
2. Belly breathing, and the use of breathing to generate energy.
3. The Goblet Squat. How to load the weight, breathing while performing this squat. Back positioning and tips and tricks to get the back aligned correctly. Prying the knees apart by using the tips of the elbows against the inner thighs. Proper alignment of the knees and feet.
4. The Turkish Get-Up – We went through each of the parts of the Turkish Get-Up one by one. Very complex, a great move and great to get instruction on it live. Proper positioning of the limbs, and also where to look during each part of the Get-Up.
5. The Two Arm and One Arm Swing – Proper foot positioning on start, using the deadlift to load the weight, alignment and bracing of the body for swinging. Use of glutes and hamstrings to launch the kettlebell, timing of the arms and when to bend over. Proper height of the swing.
In each one, we were asked to take the information we got and teach it to our partners. This helped us practice coaching the concepts and what to look for, and how to correct it. Tips and tricks abound, and the coaching experience of the RKC instructors showed.
All day we grabbed kettlebells of varying sizes, given the exercise we were practicing. We would do them over and over and over again and coaches helped correct bad movements. By the end of the day, we were all wiped! And the half working A/C didn’t help either.
The real kicker came at the end. Not only did we have to do the strength test in the beginning, we then had to do a mini-strength test of the Goblet Squat, the Turkish Get-Up, AND the one armed Swing! Good thing I brought two bottles of energy drink and tons of fruit and trail mix. But at the end of the day, all of that was nearly gone.
We got up one by one to test. I did OK with the Goblet Squat and one armed Swing, but totally messed up the Turkish Get-Up. I thought I was sunk! But then, one of the RKC coaches called me back up to demonstrate the Turkish Get-Up and he passed me thankfully, attributing the first fail to nerves. Whew! Those that do not pass need to submit a video to the coaches within a month or so for retest. Thankfully I got all of it done that day.
They gave us our coveted HKC manuals and I bought a Five Points Academy T-shirt for a souvenir: 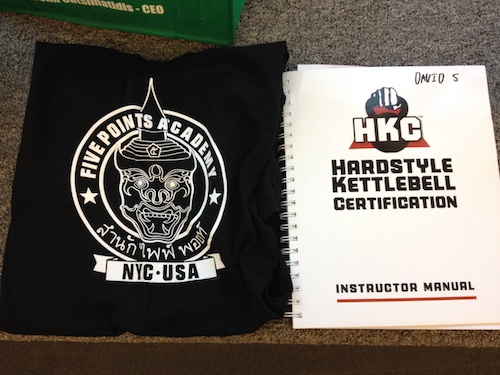 Afterwards, I stunk and felt like I had raced an Ironman! For days after, my hamstrings and glutes were tight. At least this was as it should be; if my arms were tight, then I wasn’t executing kettlebell moves correctly! But certainly I was not trained enough for that kind of day…
After completing the HKC, I’ve now got my sights on the RKC. This is now three similar grueling days of instruction on coaching methods (and the participants are practicing the moves with the kettlebells all day, each day) and then, the nice big strength test at the end consisting of snatching a 24kg/53 lb a minimum of 100 times in 5 minutes. More on this later as I begin the journey to see if I can even hoist that much weight over my head without doing some serious damage to myself.